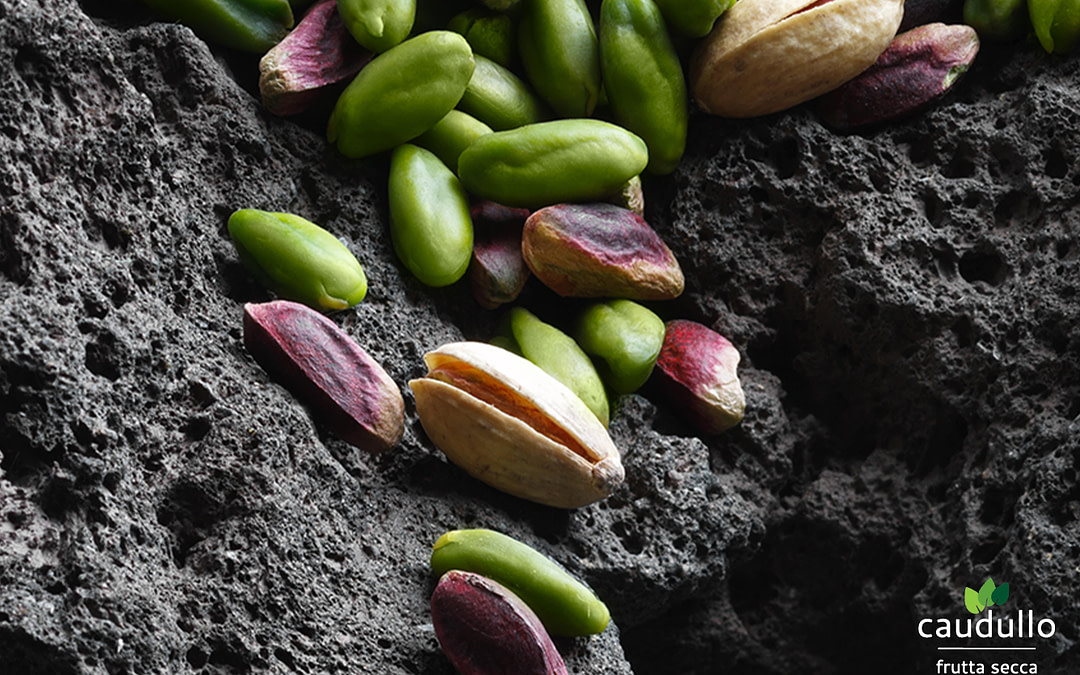 The green pistachio of Bronte DOP is the most valuable and famous variety of pistachio in the world. And the reasons are soon said: an unmistakable taste, an incomparable color (of a bright emerald green) and a cultivation that still follows the true peasant tradition today. The product obtained the DOP (Protected Designation of Origin) certification from the European Union in June 2009. A recognition that wants to distinguish it from all other types of pistachios, often imported from other parts of the world such as America, Iran, Turkey, Greece or Spain.

When it comes to Bronte pistachio, then, one cannot but think of Sicily, the true homeland of this much appreciated fruit. It is precisely on the slopes of Mount Etna and precisely in Bronte, in fact, that this excellence is produced, cultivated and marketed following in a maniacal way what tradition says.

But through which stages is the Bronte pistachio grown? How does it arrive on our tables? The time has come to get to know the history, production and harvest of this fruit, called by the producers “frastuca” or also Oro Verde di Sicilia.

The green pistachio of Bronte is produced from a very particular and very long-lived plant: the Pistacia vera.

It is no exaggeration to say that pistachio is a plantation that almost originated with the world: the ancient Jews already cultivated it, as well as the more oriental populations. The plant was introduced by Lucio Vitello (Roman governor of Syria) around 20-30 after Christ. But it is Sicily that we owe a more massive cultivation: around 900 AD, in fact, when the Arabs landed in the Sicilian territory, they decided to cultivate pistachio by exploiting its more favorable climate than in other countries. The chosen place was Bronte, a village on the slopes of Etna, at an altitude between 300 and 900 m.

But why right there? With its lava soil, fertilized by constant volcanic ashes, it was possible to promote a truly unique fruit production, not only in taste but also in appearance. In fact, with its hot and dry climate, combined with a lava soil rich in minerals, it became easy to generate a fruit with priceless organoleptic properties.

Green pistachio of Bronte DOP: how it is grown

The cultivation of the Bronte green pistachio follows very precise rules. As mentioned above, the uniqueness of this fruit lies entirely in the territory in which it is grown, that is, on the slopes of Etna. Here, the trees grow very naturally, albeit with a certain slowness.

The plant is characterized by a thick crown with large clusters of fruit, no more than 5 meters high. It has deep roots, a short trunk and a grayish bark. After the grafting of the plantation, the phase of full production takes place intensely only after 10 years. A plant of this type, in the prime of its life, however, can produce up to 20-30 kilos of nuts.

Cultivation involves a pruning phase carried out from November to March, aimed at eliminating any dry branches and promoting ventilation and lighting of the plantation.

In even years, there is also the so-called degemming process: the blossoming buds are eliminated manually in such a way as to favor the “charge” (ie harvesting) in the following year. Afterwards, the pistachio arrives in its ripening phase around August / September, in odd years. The color of the husk turns white and this is the signal that the fruit can finally be harvested.

How does the pistachio harvest take place?

The Bronte pistachio is harvested every two years, as mentioned, in odd years. The aim is to obtain an even more valuable fruit.

But how does this important phase happen? What distinguishes the Bronte pistachio from many others is precisely the collection of the same which occurs strictly manually. The lava soil in which the production takes place, in fact, does not allow the introduction of real machines. And it is precisely the effort of harvesting and the use of expensive labor employed over the two years that affect the final price of the product.

The harvesting process takes place in this way: the attendant shakes each branch of the tree to drop the bunches of fruit. These are then gathered in a container carried on the shoulder. It is a fast paced game of movement often handed down from father to son.

After this phase, the fruit is mechanically “shelled” (ie the husk is removed) and left to dry in the sun for a few days to remove moisture. The pistachios are subsequently placed in jute bags and then proceed to the storage and marketing phase.

Characteristics of the real green pistachio of Bronte DOP

But what is it that distinguishes the true green pistachio of Bronte DOP from all the others? There are three elements to consider: appearance, aroma, taste.

Let’s start with the appearance: the Bronte pistachio consists of an elongated, almost pointed drupe. Its husk is thin, the endocarp is long while the seed is a bright green color. Not surprisingly, many producers speak of pistachio as a fruit “ruby red on the outside and emerald green on the inside”. This greenish color is not dictated by chance but is due to a strong presence of chlorophyll, of a greater quantity than all other pistachios of different origins.

As for the scent, this is delicate, resinous, full. The flavor, on the other hand, is absolutely sweet. In fact, the Bronte pistachio is never salted and it is a distinctive feature, useful for recognizing it from any imitations.